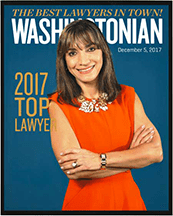 Parastoo Golesorkhi Zahedi  is an immigration attorney who partners with Maggio Kattar Nahajzer + Alexander PC  as Of Counsel to bring her unique expertise in U.S. immigration litigation and other matters, including adjustment of status and naturalization, asylum and refugee status, detention and bond, cancellation of removal, waivers of inadmissibility, immigration consequences of criminal convictions, Violence Against Women Act (VAWA) petitions, and federal court litigation.  She has been a solo practitioner with the Law Offices of Zahedi PLLC since 1993.

After graduating from the Georgetown University Law Center in 1988, she was employed as an Associate for a number of Law Firms in the Washington DC Metropolitan area before setting up her own practice, which exclusively deals in the area of Immigration & Nationality Law.

She has successfully represented clients in matters involving adjustment of status and naturalization, asylum and refugee status, detention and bond, cancellation of removal, waivers of inadmissibility, immigration consequences of criminal convictions, Violence Against Women Act (VAWA) petitions, and federal court litigation. She has also handled business immigration matters in the context of obtaining both nonimmigrant visas(L1A/L1B, H1B/H3, H2B,  O, P, E) as well as immigrant petitions for all employment categories including the Extraordinary Ability category.  Parastoo’s broad experience allows her to craft comprehensive solutions for immigrants of all status to Maggio Kattar’s clients.

As an active member of the American Immigration Lawyers Association, she has served as the DC Chapter President for the Washington DC Chapter [2007-2008] as well as holding other executive positions for this organization. She is a frequent speaker at national and local conferences on the topic of immigration law as well as serve as Liaison with government agencies on behalf of other attorneys and members of AILA. I In addition she serves as an AILA Mentor in the area of Asylum & Refugee Law for other immigration attorneys nationwide.

Zulu
We use cookies to ensure that we give you the best experience on our website. By clicking OK you offer your consent to our Terms and Conditions.Ok