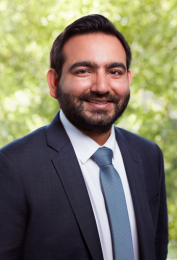 Basim Kamal focuses his practice on employment-based immigration. In his current role as a senior attorney, he handles a variety of U.S. nonimmigrant and immigrant matters, including specialty occupation visas, intracompany transfer visas, PERM, and employment-based permanent residency applications. Basim assists clients from a variety of industries, including higher education, financial services, and information technology.

Basim graduated from Loyola University of Chicago School of Law in 2016, and received his B.A. in Economics and Political Science from the University of Michigan in 2010. While in law school, Basim interned at the U.S. DOJ EOIR Detroit Immigration Court, as well as with USCIS’s Office of the Chief Counsel. Basim is a member of the American Immigration Lawyers Association (AILA), and is fluent in both Urdu and Hindi.

Basim’s practice is limited to federal immigration matters and he is admitted to practice in Virginia.

Zulu
We use cookies to ensure that we give you the best experience on our website. By clicking OK you offer your consent to our Terms and Conditions.Ok